I have recently learned that the former owner’s husband of this house is a member and owner of a local landscaping/greenhouse company. This would likely explain all the nice landscaping that has already been done for me.  Now, I am not very good at gardening. I’m very forgetful and neglectful and things just die on me. It’s not that I don’t love plants, it’s just that I don’t take very good care of them.

This, however, will not stop me from attempting to take care of this well landscaped yard. I started by asking around and got some great ideas.  First, I learned about the burning bush. It’s red in the fall. Red is my favorite color and (bonus) it requires very little care. I cleared out a corner for it and am awaiting its arrival this week.  Then, I had to weed. I waited too long and the weeds had taken over my flower bed. Problem was, the only days I had time to do it were the hottest days of Spring so far. It took longer than it should have, but the weeding is done and the mulch has been spread. I think next year I’m gonna have a truckload of it delivered instead of dealing with those bags.

Not much to see here now, but he carnations are planted in the black bed on the near side of the walkway

Second, I decided some of my favorites belong in my yard. I purchased 6 carnation plants. Carnations are my most favorite flower and I want some. Now, there are people who tell me that carnations won’t grow here in the frozen tundra known as Maine, but all the online literature I have found says they will. So it’s done. All 6 have been planted. I did neglect to fertilize the first batch, but maybe they will be fine.

Last but not least I decided that outside my bedroom windows I needed to have thorny bushes. Roses are nice. I did a little research and found some that need little care. I picked up a yellow “Carefree Sunshine Rose” and a pink “Fairy Rose”. Both are reputed to be hardy in zone 5 and require very little care. 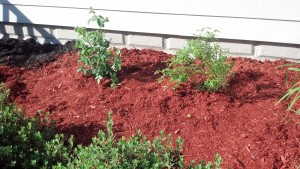 Yellow on the left, Pink on the right

The Yellow rosebush has budded once already. The flowers only lasted a couple of days. The pink one isn’t doing much just yet, but I haven’t given up hope.

And I cannot forget the rhubarb. I transplanted a large rhubarb plant that has been transplanted before. These plants were once growing at my grandfather’s house and were moved to my parents house when Pepere sold his house. I wanted one of these rhubarb plants, so my father dug one up and broke it into about 14 pieces. These pieces were ALL planted, and most have survived so far. Theses guys were planted in mid May.

That was them after I planted them.  This is them on the first day of Summer: 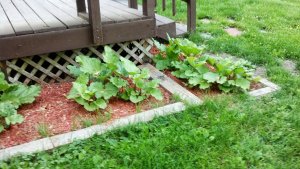 As you can see, they are growing quite well. I am thrilled to have something that has been around since my childhood growing in my back yard.  Dare I mention how much healthier the grass looks in the recent pictures?

All said and done I’ve been enjoying the work outside. Who knew I would like mowing the lawn? Soon there will be adequate lawn furniture for relaxing outside with a book in one hand and a drink in the other.

Thanks for stopping by, please feel free to leave any comments.